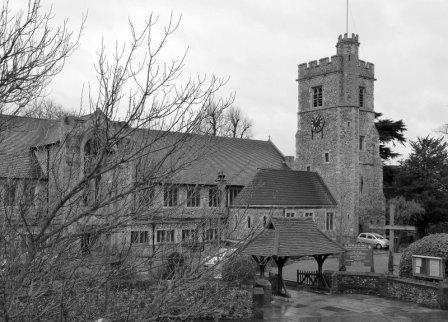 Bromley Parish Church has played a significant role in the life of Bromley for over 800 years.

We are not certain when the first church was built on the present site but it is known that Bromley started with a charter of 862 AD by Ethelbert, King of Wessex and Kent In 966/7 King Eadgar granted lands at Bromley to Aelfstan, Bishop of Rochester, but shortly after the lands were taken back. In 998 King Ethelred II - the Unready - was reconciled with the monks of St Andrew of Rochester and most of the land was restored  to the Bishop.

The church was destroyed by a bomb on the night of 16 April 1941. Many items in the church have been generously donated by other churches and organisations, and  together with the hard work and generosity of the parishioners in raising funds, a new Bromley Parish Church was able to rise from the ruins.

More details of the Church and its History can be found in the document  at the bottom of this page, A History and Guide produced in 2007 by Helen Gribble with encouragement from the Rev'd Canon Michael Camp

The first written record of a Parish Church appears in the Bishop of Rochester’s records of 1126.

The first recorded rector was Richard de Wendover 1226-1238, who became Bishop of Rochester and was later buried in Westminster Abbey. Records indicate a separate parish church early in the 13th century and possibly much of the 12th century.

The Bishop's Register mentions the existence of St Blaise's Chapel in the Bishop's Palace and a separate church dedicated to St. Peter and St. Paul.

Church rebuilt in the Gothic style having fallen into ruins. No further restoration took place until the 18th Century

Appointment of perpetual Vicars Henry VIII ordered that they should be ordained and endowed by the Bishop of Rochester.

A second gallery added to provide seating for the Charity Children of the parish.

A new church building was constructed though the tower was retained

The Church was destroyed in the Bromley Blitz.  Only the tower remained

The foundation stone was laid by Princess Elizabeth. The new church would be 160 feet 6 inches in length, 66 feet across at the widest part and seat 830 people. Stones from Rochester  and Canterbury cathedrals were incorporated in the wall of the Children's Chapel alongside the foundation stone.

Church rooms added as an extension to the church.

Gravestones in the churchyard have been recorded by the Kent Archaeological Society and can be found here or at findagrave here.

A History and Guide to Bromley Parish Church