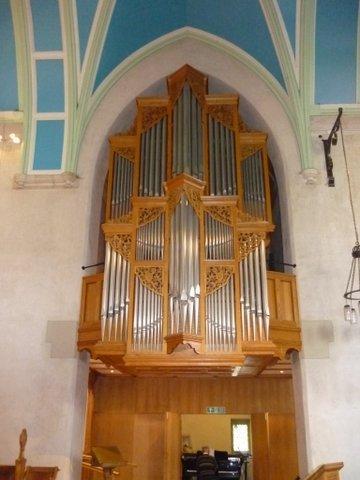 Our Bank Holiday organ recitals continue on Monday 30th August with a recital given by Gary Sieling, who is a former Director of Music here at St Peter and St Paul.

There is no admission charge for the recital but there will be an opportunity to contribute to a retiring collection.  It will not be necessary to prebook seats on this occasion and we are hoping to provide refreshments, served outside, before the recital.

Gary Sieling was born in Bedfordshire and educated at Dunstable Grammar School.  He read for his BMus degree at the University of London, Goldsmiths’ College and while a student played for the debut of the London Cantata Choir with whom he is still associated.  He studied organ with Peter Moorse, Nicholas Danby at the Royal College of Music, Dr Peter le Huray at St Catherine’s College Cambridge, and Jane Parker-Smith.  He was awarded FRCO in 1981 and MA in Performance from Anglia Ruskin University in 1997, studying organ with Nicholas Kynaston at Caius College Cambridge.

Gary was organist of Dunstable Priory and then Assistant Master of Music at Peterborough Cathedral.  During his time there he was Conductor of the Peterborough Philharmonic Society, Director of the St Peter’s Singers, and Founder and Associate Conductor of the City of Peterborough Symphony Orchestra.  He also taught organ and piano at Oundle and Stamford Schools.  Gary played for the Cathedral Choir on two tours of America in addition to regular TV and radio broadcasts and recordings.

After 6 years in London as Director of Music at Bromley Parish Church and All Saints Blackheath, Gary relocated to Reading to join the music staff at the Abbey School and take on the post of Director of Music at St Mary the Virgin, Henley-on-Thames.  He directs the chamber choir ‘FineChants’ and works as a freelance organist, harpsichordist, conductor, adjudicator, and examiner for the Royal College of Organists.  Gary spent the summers of 2009 and 2011 as the Music Adjudicator to the Sri Lanka Performing Arts Festival.

Gary’s CD recordings include one for Priory Records from Chelmsford Cathedral featuring the major organ works of Stanley Vann, sometime organist of Peterborough Cathedral, and the ‘Kenneth Leighton Memorial Album’ which he compiled and published.  Gary also  recorded a CD of harpsichord and organ music at Bromley Parish Church.  Organ concert venues in this country include St Paul’s, Canterbury and Westminster Cathedrals, King’s College Cambridge and Westminster Abbey.  He has made 10 international concert tours visiting Denmark, Germany, Italy and USA.